HOW IT ALL BEGAN

William Harvey and his three sons – Ronnie, Jack and Gerald – began selling crabs, crawfish and lobsters in 1955 to satisfy a short seasonal market.

In the winter and spring months, their boat The Three Brothers fished to subsidise earnings. The business originally traded from a small unit in The Fradgan, located behind the Fish Market, close to the Old Post Office, right in the centre of historic Newlyn.

A two-storey building at Tolcarne was also used as a maintenance base for fishing vessels, transport and property as well as for cold storage. The current Coombe headquarters were taken over unit by unit from neighbours as they retired or moved on. This building has always been associated with the fishing industry. Salt was shovelled into one large store and this was used to cure the locally caught pilchards; alongside the salt store, stables were provided for horses used to transport fish from boats landing on beaches; haylofts were used above the stables; at the southern end were fish packing stores.

The business had sole ownership in 1974 and adapted this building into a retail outlet, cooking, processing, storage and administration unit, whilst still retaining its historic charm.

Live shellfish were originally stored in floating wooden boxes in the harbour and sold to live shellfish carrying boats visiting weekly in season from France. However, the hours were long and the work was tough so in 1979 the Partners opened a purpose built live shellfish storage building that is capable of holding 30 tons in fresh sea water. Shellfish is now held here before use in the factories or before despatch live throughout the UK and Western Europe.

In 1980, Her Majesty The Queen, The Duke of Edinburgh and The Duke of York visited Newlyn. During the visit, The Queen named the new pier The Mary Williams Pier.

The Queen and her party also visited our newly built shellfish storage tanks to be introduced to all the Partners. Ronnie Harvey, Jack Harvey and Gerald Harvey had the pleasure of demonstrating our live shellfish, cooked shellfish and shellfish pots to the Royal party. 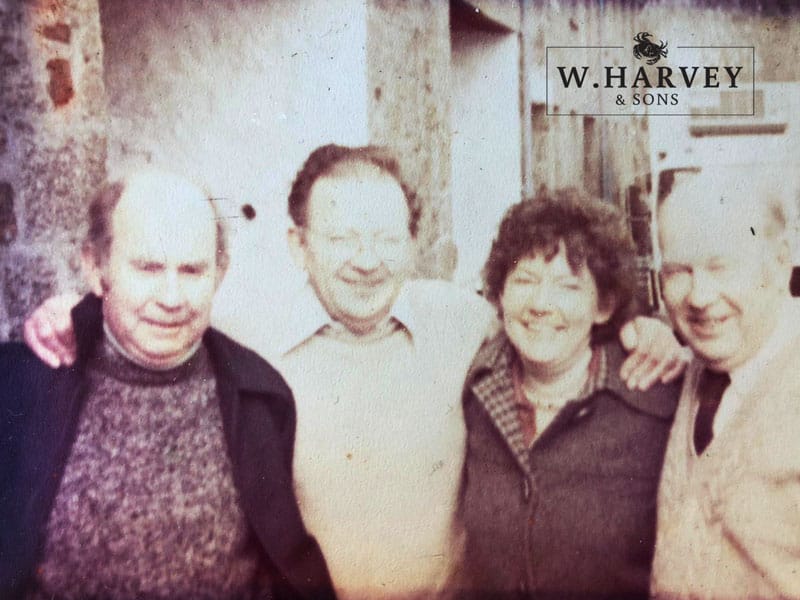 Ronnie, Jack and Gerald Harvey (pictured with sister Barbara) retire from the business as it moves into a new era. The company evolved from being vessel owners and selling live product into a processing and creating Cornwall’s finest crab meat.

Julian Harvey becomes a Partner in the business. 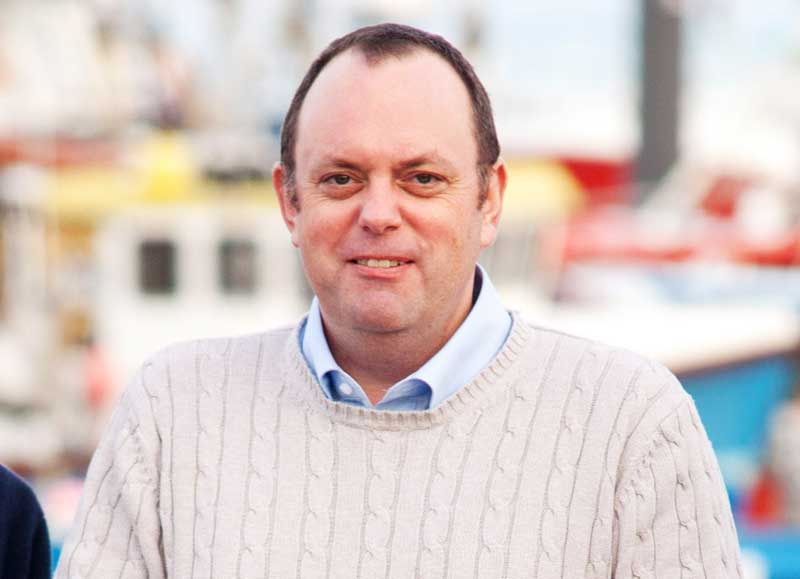 Matthew Harvey becomes a Partner in the business.

The William Harvey, the longest serving vessel in the fleet, was sold. The business then began working directly with independent fisherman in the region.

With the company growing and evolving, W. Harvey & Sons becomes a limited company.

William Harvey (pictured right) becomes a Director of the business.

Director Paul Harvey retires after 46 years in the business. Paul first started as a 16 year old boy in 1974 under the tutelage and close supervision of his Uncle’s Ronnie and Jack, and his Dad Gerald. The core values of the business passed onto Paul from his uncles and dad continue to be a major part of the business today. Paul made many friends in the industry and formed close ties with fisherman from all over the South West, UK customers and on the continent. 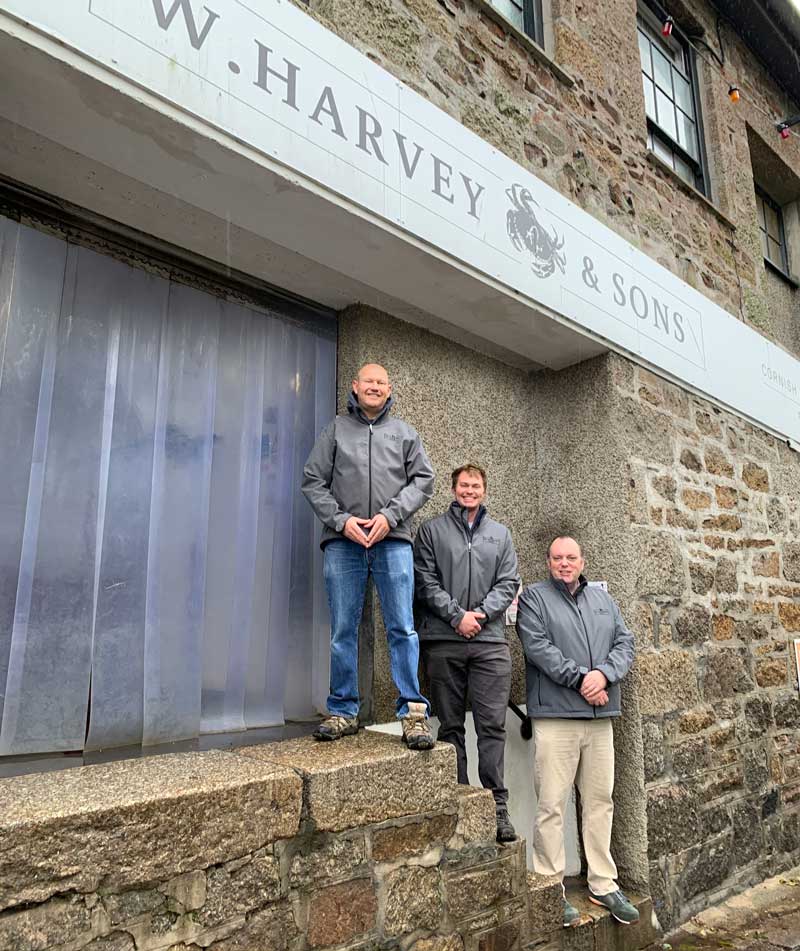 Julian Harvey, William Harvey and Matthew Harvey are the current directors of W. Harvey & Sons. All descendants of founder William, they will steer the business through the latest challenges of Brexit and Coronavirus to ensure the business continues to grow and develop for another 65 years and beyond. 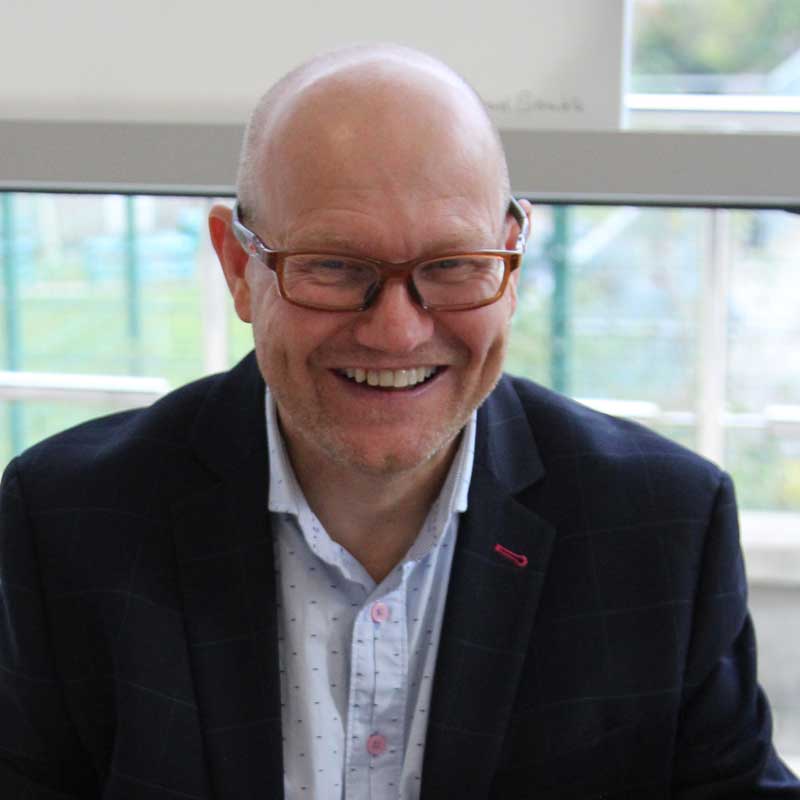 Julian is the son of Gerald Harvey and William Harvey’s grandson. He joined the business in 1985, starting training as a marine engineer as he was good at fixing the boats. After two years, he started working more at the live crab tanks.

Rising through the ranks to learn all aspects of the business, Julian became a Partner in 1994. His role from then on focused on overseeing the e-commerce, estate maintenance, IT, staff welfare, management meetings, staff forums and corporate image.

From 2021, Julian will manage the UK sales operation, increasing its wholesale offering on home soil, as well as developing the company’s consumer direct sales. This includes overseeing all marketing and brand management.

Newlyn born and bred, Julian still lives in the historic town and is married with two young children, who can already be found working at the crab tanks during the school holidays. 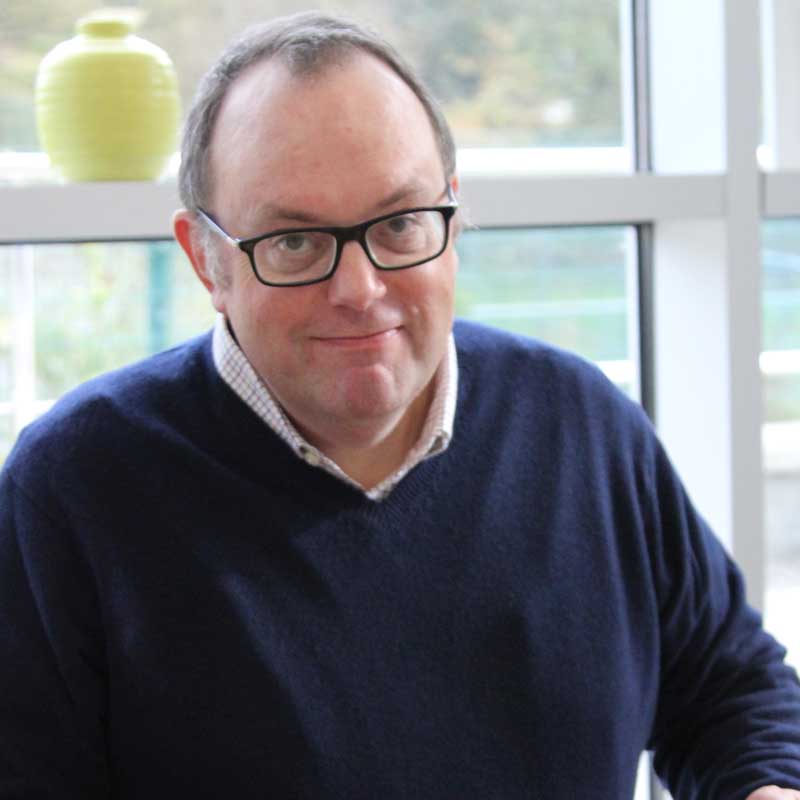 Matthew is the son of Matt Harvey and William Harvey’s great-grandchild. Matthew joined the business in 1993 straight from Buckinghamshire Business College. He had worked in the summer holidays for the five years previous.

As a schoolboy, he went out in the lorries with the drivers picking up fish and shellfish from Cornish coves and watched the girls picking crab meat from the doorway. Matthew’s dad also worked a small punt in Mounts Bay hand-hauling lobster pots and he would go out with him working the outboard.

Once full-time, he started in the boiler room and worked his way through the business, fixing the boats, collecting the shellfish as it landed, before moving into the office. Here he learnt that a business needs to look after good suppliers, staff and customers equally. He also applied for European and UK funding so the business could grow its crab processing operation to meet increasing demand for ready to eat products.

Becoming a Partner in 1997, Matthew says the business was in his blood with his great grandfather, grand-parents, parents, sister and brother all having worked for the firm alongside great uncles and aunts, second cousins and their wives. 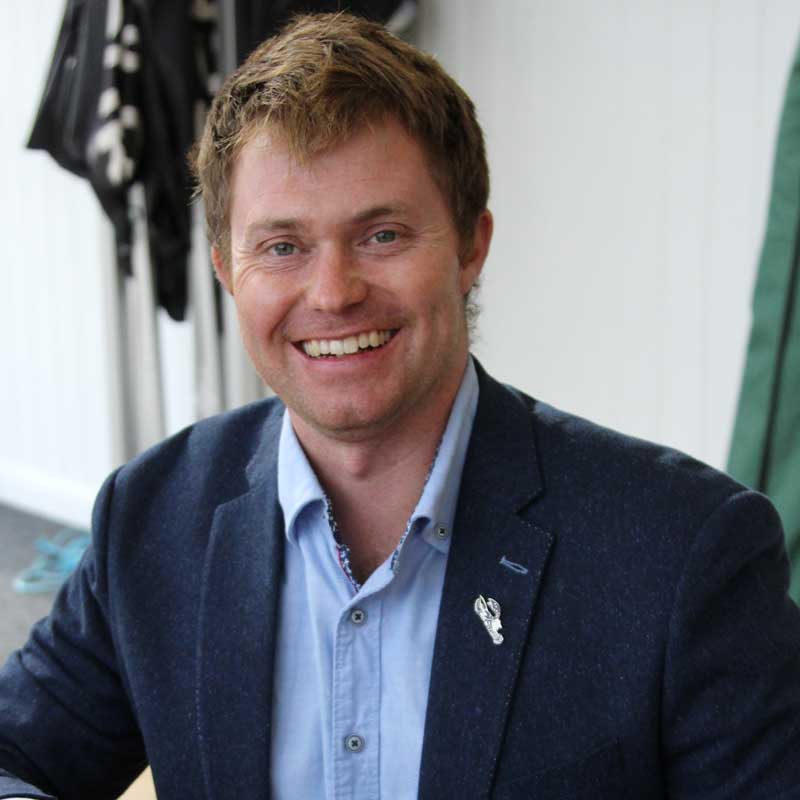 William started working for the business in 2002 when he was an innocent 15-year-old. He’d spend school holidays at the live crab tanks where he’d be told the ways of the world by the visiting fisherman and lorry drivers from overseas.

After moving all the way to Plymouth to study Marine Biology at university, William returned to the fold in 2008 and became responsible for the crab tanks in 2010. His role is at the frontline of the business, liaising with all the suppliers which includes over 100 fishermen. William negotiates prices and handles wholesale live sales as well as managing quality control for all the live products as they come direct off the boat.

Living just outside of Newlyn in the neighbouring town of Penzance with his wife and two young daughters, William has fond memories of playing in Newlyn Harbour and the local area as a child and feels very lucky to have grown up in such a beautiful part of the world.

A family business successfully trading into the fourth generation is extremely rare these days. We are all determined to honour the legacy set up by our predecessors and pass our business onto the next generations.

As school aged sons and daughters, we learnt to appreciate the value of money by working on the shop floor alongside some of the staff we now employ.

Our business education started at a young age when we would observe how our parents gave instructions to staff, took orders from customers and struck deals with our fishermen suppliers. No favours were shown and when we asked why we were doing the dirtiest of jobs, we got told because one day we would have to tell somebody to do exactly the same task.

Each of us is extremely proud to be carrying on the traditions of a business set up and established by older family members. Living and working in a beautiful part of the world is another perk of the job!

DOWN BY THE SEA

Our Home at Newlyn Harbour, Penzance

Harbour activity in Newlyn was first recorded in 1435 by the Bishop of Exeter. The port is now one of the largest fishing harbours in the UK and is the first 24/7 harbour available to boats fishing Southwest English waters.

Newlyn harbour is home to W. Harvey & Sons along with potters, handliners, netters, scallopers, beam trawlers, multi-rig trawlers, the Penlee Lifeboat and acts as a port of refuge in bad weather.

Floating moorings give berthing facilities for local and visiting yachts. The Harbour Master and his team are very helpful and run the harbour, fish market and surrounding areas for the benefit of a diverse group of stakeholders. Elected Harbour Commissioners from a wide background serve voluntarily to provide advice to the Harbour Master.